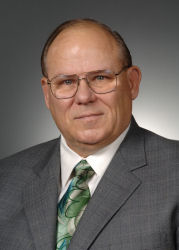 Dr. Michael J. Kurylo, senior research scientist at the Goddard Earth Sciences and Technology Center of the University of Maryland Baltimore County, will receive the 2008 Hillebrand Prize from the Chemical Society of Washington at its dinner meeting on March 12 at the NASA Goddard Recreation Center. Dr. Kurylo will address the meeting with a seminar entitled “From the Laboratory to the Stratosphere: Constructing a Bridge Between Science and Policy”.Dr. Kurylo received a B.S. degree in chemistry from Boston College in 1966 and a Ph.D. in physical chemistry from the Catholic University of America in 1969. Following a National Research Council Postdoctoral Associateship at the National Bureau of Standards (now NIST), he was a Research Chemist at NBS and NIST from 1971 – 2003. During the last half of this period, he continued his NIST research in laboratory atmospheric kinetics and photochemistry while serving on a detailed assignment to the National Aeronautics and Space Administration as manager of NASA’s Congressionally-mandated Upper Atmosphere Research Program. In 2004 he transferred to NASA as a Program Scientist in Atmospheric Composition, and retired from the federal government in 2008.

Dr. Kurylo’s laboratory research has focused on gas phase free radical photochemistry and kinetics with an emphasis on atmospheric processes related to stratospheric ozone depletion and climate change. An author or co-author of 140 scientific articles, he has given more than 190 technical presentations nationally and internationally. As a NASA program scientist he was largely responsible for organizing and implementing several airborne scientific investigations that linked the depletion of stratospheric ozone to manmade chemicals containing chlorine and bromine. He has provided similar leadership for other field investigations utilizing measurements from satellites, aircraft, balloons, and the ground for examining the connections between changes in atmospheric composition and in climate. Since 1987, he has served at the interface between scientific research and international environmental policy through extensive participation in each of the Scientific Assessments of Ozone Depletion conducted by the United Nations Environment Programme and the World Meteorological Organization. These assessments are required by the Parties to the Montreal Protocol on Substances that Deplete the Ozone Layer and the Vienna Convention for the Protection of the Ozone Layer. He has been elected Chair of several past meetings of international Ozone Research Managers of the Parties to the Vienna Convention and has presented the consensus recommendations at subsequent meetings of the Parties (most recently in Doha, Qatar this past November). Dr. Kurylo also holds leadership positions on several international organizations in atmospheric chemistry.

As an internationally acclaimed atmospheric research scientist and program manager, Dr. Kurylo has received numerous awards. These include the Department of Commerce Bronze and Silver Medals, two NASA Exceptional Service Medals, the NASA Cooperative External Achievement Award, more than a dozen NASA Group Achievement Awards, the Catholic University of America Alumni Achievement Award in the Field of Science, the National Oceanic and Atmospheric Administration Environmental Hero Award, and the US Environmental Protection Agency Stratospheric Ozone Protection Award. His efforts leading to the success of the Montreal Protocol have recently been acknowledged by his being named to the Montreal Protocol Who’s Who listing. Dr. Kurylo is a member of the ACS, the American Physical Society, the American Geophysical Union, and Sigma Xi.At the CSW dinner meeting seminar, Dr. Kurylo will describe developments in laboratory measurement techniques for gas phase kinetics and photochemistry that have enabled atmospheric scientists to isolate and investigate specific chemical reactions. These studies have provided the data required for modeling calculations of the transformations of important atmospheric trace species. The role of measurement campaigns for studying the atmosphere itself as a complex photochemical reactor will also be described.

Dr. Kurylo will also provide an historical perspective of the development of past and present national and international research programs for investigating changes in atmospheric composition. Scientific achievement under these programs have led to the success of the Montreal Protocol on Substances that Deplete the Ozone Layer.

Abstract: Depletion of the Earth’s stratospheric ozone layer was the first manifestation of global environmental change attributable to human activity. Ranging from moderate losses at mid-latitudes to large-scale seasonal losses in the Polar Regions, its detection and attribution have required integrated efforts across the full spectrum of atmospheric science. Sophisticated atmospheric observations from the ground, balloons, aircraft, and satellites together with the results from laboratory investigations have provided the scientific bases for sound environmental policy at the national and international levels. Dr. Kurylo will describe the developments in laboratory measurement techniques for gas phase kinetics and photochemistry that have enabled atmospheric scientists to isolate and investigate specific chemical reactions. The role of measurement campaigns for studying the atmosphere itself as a complex photochemical reactor will also be described. The subsequent interpretation of the field measurement observations through the use of laboratory data has been a key element in the formulation of international assessments that underlie environmental treaties.

The annual election of Officers, Councilors, and Managers of the Chemical Society of Washington will be held in November 2019 in accordance […]