One of the earliest professional questions we are ever asked is “What do you want to be when you grow up?” This starts at a young age, and for many kids, they often start off wanting to be a fireman, a basketball player, or maybe whatever their parents do, but over time the choices get less abstract and we have all had to make decisions about college majors and job offers that shape the contours of our career trajectories.

My career has shifted directions a number of times and I have found my way to what may seem like a non-traditional career for a researcher and engineer, that of policy. I was asked to author a column for The Capital Chemist to share with readers my experiences at the intersection of science and policy. First, however, I thought it might be informative if I start the series with how I got to where I currently am in my career.

My childhood interest in math, science and creating things led me to become a chemical engineer. My first job out of college saw me working in industrial operations and then later in design and construction. While I loved the creative problem-solving element of my job, I began looking five or ten years ahead in my career and did not really see myself being happy with the options before me. I did not want to take on the job of my boss or really anyone else at the organization, so I started thinking about a career move.

As an engineer, I’m naturally interested in how science can be translated into tangible benefits for society, and I realized that I wanted to be a part of something bigger than just my company’s projects. I wanted to be a part of the societal discussion about the direction and role of science, and to help bring a better understanding of – and excitement for – science to others. I certainly could have stayed in industry and found ways to pursue those interests, but I believed that the best place for me to contribute to that broad dialog and education was at a university as a professor. So, after nearly seven years in industry, I quit my job and went to graduate school.

I enjoyed graduate school immensely, but as time passed and I pondered my future career I started having concerns about what lay ahead. The prospect of chasing grants and publications that would be necessary to be a successful academic was not appealing, and was not what I had in mind when I originally decided to go back to school. The engineer in me also wanted a closer translational link between my day-to-day efforts and their societal impact. So, as I was wrapping up my thesis work I began to strategize how to build a less traditional academic career in a way that would optimize my interests.

Fortunately, I secured a 10-week science policy fellowship at the National Academy of Engineering, which fell between the end of my graduate work and the start of my post-doc. Up to that point in my mind there were basically two career paths that one could take — either industry or academia — and I was not really aware of a career in policy as an option. I spent a lot of time during those short 10 weeks meeting with other scientists and engineers who had entered into policy careers to find out what they did and how they got there.

I had assumed that science policy was a niche field without a lot of options, so I was surprised to find scientists developing and implementing policy on issues ranging the gamut from energy to healthcare, food, nuclear arms, global health and the environment. They worked in nearly every agency and branch of government as well as for non-profits. Some were still working squarely in their field of training, but I also saw many who were applying their general scientific problem-solving skills in fields far from their academic training.

In short, I met a lot of people applying their knowledge and love of science in unique policy-focused efforts to tackle some of the biggest issues that our country faces. I saw careers that excited me and would allow me to pursue my interests in a way that felt better suited to the type of work that I was looking for. With that transformative experience the policy phase of my career began.

In the coming months I hope to share with you both some of what I learned as I transitioned into my current career as well as the some of the issues that I work on day to day.

YCC will be hosting practice presentations before the ACS meeting the weekend of March 10-11.  Come give your ACS talk to your […] 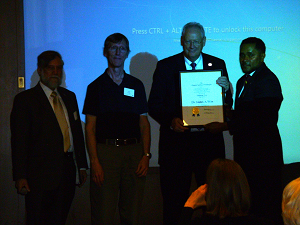 Dr. Stephen A. Wise, Senior Analytical Chemist and Program Coordinator for Food and Nutrition within the Chemical Sciences Division of NIST, was […]